Buckey, me and a wrangler: Tales of an Alaskan Dall Sheep Hunt by Don Seibel

You could tell that he was in a hurry. He was making his way from one mountain range to another, crossing through the valley floor, always aware of his surroundings, as it is here that sheep are most vulnerable to wolves and other predators. In no time, he would be high onto the rocky outcroppings where he would again feel protected. We knew we had to move fast to avoid detection. Being on the same side of the mountain he was climbing to, and he would surely wind us. 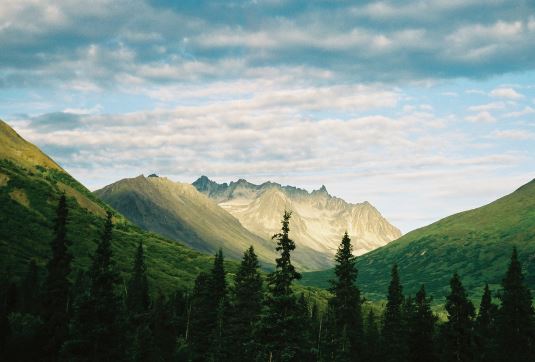 Hunting Dall sheep is one of Alaska’s great hunting adventures. This dream hunt was realized when Buckey was referred to me by a close friend who had hunted with him in the past. With a registered guide license of number 34, Buckey Winkley has been guiding Alaskan wilderness for over 41 years.

Headquartered out of Rainy Pass Lodge, 125 air miles northwest of Anchorage, Buckey and his partner, Steve Perrins, who owns the lodge along with his wife Denise, have access to an array of Alaskan game including, Dall sheep, Grizzly, and Black bear, Caribou, Moose, Wolverine, and Wolves.

Rainy Pass Lodge is the oldest hunting lodge in Alaska, located on the Iditarod Trail, and the Lodge is situated in a pristine wilderness setting. Steve and Denise Perrins purchased the Lodge approximately two years ago have done wonders to the facility. The main lodge has two wings with four double guest rooms that provide modern living amenities for your comfort and convenience.

Rainy Pass is only accessible by plane, so in August 2004, I boarded a Beaver aircraft at Lake Hood in Anchorage and started my quest for Dall sheep. The flight took about one and one-half hours to get to Rainy Pass Lodge on the Shore of Puntilla Lake. Buckey was at the dock to greet me along with his wrangler, Bret.

I spent my first night at Rainy Pass Lodge gearing up for the twenty-mile horseback ride that we would take the following day to get to Buckey’s cabin, located in the Portage Creek drainage.
Buckey and Steve built the cabin over thirty years ago from the available spruce trees that abound in the area. The cabin is reminiscent of an old ‘trappers cabin’ of days old. 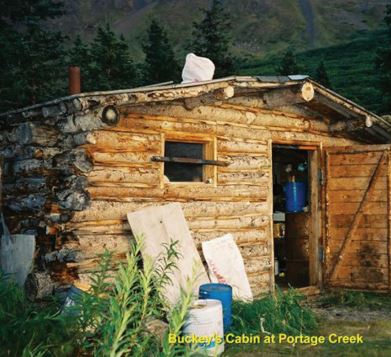 The cabin is located in the Portage Creek drainage, which sits at about 2,000 feet elevation. Nestled in a long valley floor, Portage Creek then forks into several other canyons surrounded by mountaintops reaching over 5,000 feet.

The cabin is located in the Portage Creek drainage, which sits at about 2,000 feet elevation. Nestled in a long valley floor, Portage Creek then forks into several other canyons surrounded by mountaintops reaching over 5,000 feet.

After a few days of hunting around the cabin and nearby mountains, we decided to move further into another drainage called Canyon Creek. We traveled to the tree line with the horses; the trip took less than an hour but would have taken several hours if we were to try this on foot. After tying our horses, we staked out a position that allowed us to glass two mountain ranges that rose from the canyon floor. It was here where Buckey spotted the ram about a mile up the canyon. Even at this distance, we could see his golden horns glistening in the sunlight as he was hurrying through the valley coming in our direction. 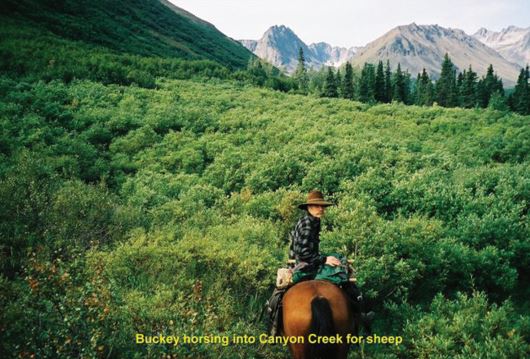 The ram was heading toward us, crossing from one side of the mountain to the other. With the wind at our back and blowing in his direction, we needed to move quickly to avoid being scented. We decided to use our horses to push through the alders and bushes that reached as high as the horse’s hindquarters and get to the opposite side of the mountain. We had hoped to intersect the ram before he passed by us. But once on the other side, we noticed that the ram had already passed and was working his way to the top of the mountain. We took a range on him, which measured over one thousand yards from our location.

The Dall eventually reached the foot of a rocky outcropping and began feeding below it. With his back toward us, we took the opportunity to break for the river bottom and close the distance. We reached the drainage and hid behind some boulders, and noted that the ram did not detect our movement.

After feeding for about ten minutes, the ram decided to move again and moved to the top of the outcropping and lay down. With the ram positioned looking up towards the mountain, we decided to work our way closer to another set of boulders further up. Our goal was to reach a spot on the mountain out of the ram’s line-of-sight but close enough to get off a solid shot. We were patient in our approach, constantly glassing the ram to ensure that he did not detect us and bolt to the other side of the mountain.

We made our way to within 500 yards of the ram and hid behind more boulders. The ram turned and was clearly looking in our direction. We stayed hidden under the boulders for over an hour until the ram finally relaxed and started to feed again. His grazing moved him out of sight, and we hustled up the mountain to within 250 yards of him. I built a rest, situated my rifle, and waited for the ram to reappear. Having not seen him for over twenty minutes, Buckey felt that we could close the distance again, so we set out to reach another rock outcropping approximately one hundred yards above us. The climb was steep and slow, but we finally made it to the boulders, and I again positioned myself for a shot.

After what seemed like an eternity, he came back into view, standing on top of the outcropping. I could see his golden horns and white coat, which reflected off the morning sun. As he gazed over his domain, I was amazed by the beauty of this animal. He was truly the ‘king of the mountain’ waited until he was completely in the open and then squeezed the trigger. The shot was true, and he went down. He tried to regain his balance, and for a short moment, he stood up. Buckey whispered: “Don’t shoot again; let him die on his own.” I agreed. Within seconds the ram fell and breathed his last breath.

I am at a loss for words to describe the emotions that overwhelmed me at that moment. A great beast had just passed. After a moment of silence, Buckey shook my hand and said, “Congratulations; you’re now a Sheep Hunter.” 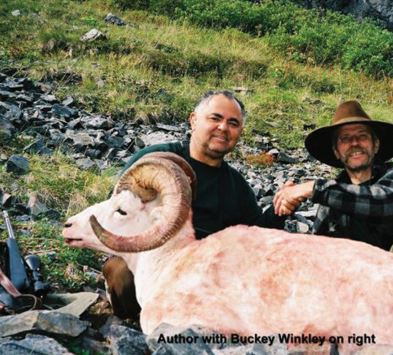 Buckey said that he was an excellent representation of the rams taken off this mountain. The ram had a full curl, and Buckey estimated he was approximately nine and half years old. It didn’t matter to me if he was the smallest or the biggest. This was the most regal animal that I have ever hunted. The hunt was not easy, but it wasn’t supposed to be; otherwise, anyone could do it. I had been planning this hunt for over a year. I worked hard to get in shape, and my hard work paid off.
Photos were taken to capture the moment. With Bret packing out the meat for me, I had the honor of carrying my horns down the mountain. As I gazed down into the valley that seemed so far away, it dawned on me how far we had actually climbed. I felt like I was standing at the top of the world, and with the view of the mountain ranges and creeks below, it truly was inspiring.

The trip down was a lot slower, but then, after all, I was in no hurry.
My hunting experience with Buckey and Bret, my wrangler, was a true Alaskan adventure and a hunt that will be remembered forever.