After Linebacker Leopard in Botswana 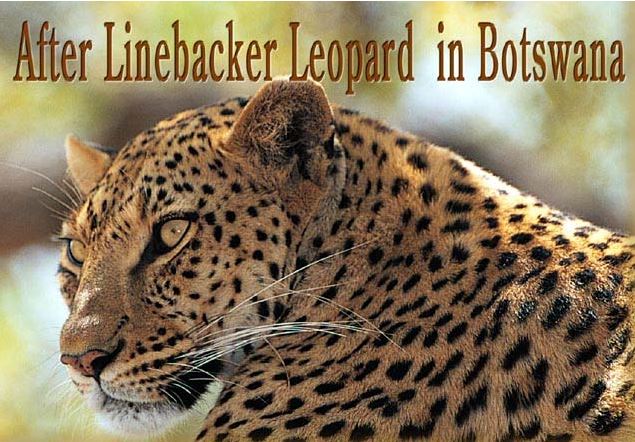 A twig snapped outside our blind. It seemed inordinately loud in the otherwise silent landscape. Mike slowly and silently raised his binocular. He then turned to me and pantomimed something walking with his fingers. Leopard! I didn’t move. I heard scrambling sounds – the leopard was undoubtedly climbing the tree. Mike watched, judging its size and trying to confirm whether it was male.

I remained hunched over. Mike soon gestured to take a look. There, 55 yards away, was the leopard. It stood on a tree limb, sharply silhouetted against the fast-fading light. Mike turned to me and mouthed the word, “Shoot.”

I slowly raised the Weatherby and got my sight picture. I chose one rosette, right over the leopard’s heart, kept the crosshairs rock-solid, and ignored the rest of creation.

We had flown into Botswana’s Maun Airport, where old friend Mike Murray met us. We had hunted with Mike on our first Botswana trip (during which we shot the No. 1 sitatunga). Our home base had been his farm, situated in the Karoo, and we had hunted great plains game. Also, we all enjoyed a really memorable bongo hunt in the Congo.

While we all had something to eat, Mike told us that things had gotten a bit tighter for hunters in Botswana. To begin with, quotas generally had been reduced, often by half. Also, sable, sitatunga, reedbuck, and lion were all completely off-quota. Severe restrictions had been placed on leopard hunting that dictated the hours one could hunt. They also limited the number of baits and even the number of blinds that could be built. The good news was that Mike had seen tracks of big leopards – our main quarry.

We bounced and jounced three hours down the road to Ivory Camp, operated by Johan Calitz Hunting Safaris. The camp showed the meticulous care, attention, and amenities of a first-class professional operation. This included nice touches, such as a welcoming campfire in the evening, cool wines, and fine cuisine. More importantly, the camp offered good, solid, reliable equipment; clean, spacious tents; an attentive staff – and lots of leopards.

We checked the rifles. As my main gun, I had brought a .340 Weatherby synthetic with a seemingly indestructible Leupold 3.5×10 that placed 250-grain Noslers downrange with laudable accuracy and power. For more refined moments, I also had a custom-built .300 Winchester Magnum Chapuis sidelock/ejector-grade double rifle with a 1.5-6X Schmidt & Bender. The double was intended as a short, powerful, fast-handling 150-yard gun, but the wide-open plains of this part of Botswana dictated that the double (alas!) should remain in camp much of the time. Both, however, checked out just fine.

We commenced the main business of leopard hunting – shooting baits. The first morning, we shot a warthog and impala. After squaring away the baits, the next job was to find appropriate trees.

After listening to Mike, I found the requirements impressive. First, of course, there must be some evidence of recent leopard activity, such as natural kills, prints, or claw marks. The tree must have some cover near the base because a leopard will never expose itself. There must be water reasonably nearby, as well as few roads or minimal habitation.

The tree must have a limb sufficiently high so that lions cannot steal the bait. The limb to be used must be readily visible and upwind to prevailing afternoon/evening breezes. Preferably, the limb should throw the leopard into relief at last light, with little foliage behind. On the other hand, the bait should be shielded from the sky above because vultures will find and foul your bait. There should be a place for a blind to be built – fairly well-hidden and downwind of the evening breeze flow (which may change during the course of the cooling afternoon) within a maximum of 100 yards. After hanging the bait in a reasonably natural fashion, you need to mask any human scent. Finally (and obviously), you need a lot of luck – along with a hungry leopard (males only).

Persistence is the most important attribute for a leopard hunter. You must regularly make the rounds of your (maximum three) baits in the mornings. If a bait has been hit, you may need to refresh it if it’s intended for a big cat, and you may need to lay plans, site yo

ur blind and construct it during midmorning, while the leopard is presumably sleeping. You should leave the blind early enough so that the leopard will not notice any commotion. Last, you should return quietly to a silent vigil in the blind about 3:30 or so in the afternoon. At least while I was there in Botswana, you couldn’t hunt after 6:30 p.m., regardless of light conditions. Obviously, this left a fairly short “window” during which to shoot your leopard.

You must constantly adhere to something known as “leopard blind etiquette.” This behavior consists of remaining extremely silent, keeping your face from reflecting light, not smoking, coughing, sneezing, shifting in the chair, or noisily turning the pages of any reading matter.

Also, you should have your rifle pre-positioned through a peephole or port so that your movement is minimal when the guide silently signals you to get ready to shoot. (You must also be sure not to awaken the official Botswana game scout, who usually falls asleep within seconds of getting into the blind with you and your guide).

We bounced and splashed through pans and meadows every day, always keeping an eye on the rising waters from Angola that might alter the patterns of leopard movement in the Okavango. We considered and rejected many a bait tree and forded many lagoons that were slowly rising and expanding. Wildebeest, lechwe, zebra, tsessebe, and various stately and colorful birds were everywhere, as were scattered groups of elephants. Once, we spotted a herd of roan in the distance. They are quite rare in Botswana and absolutely off-quota.

We had hoped to see a big kudu (at least 60 inches), so we covered a lot of extra ground over and above the bait circuit. However, a 60-inch-or-more kudu is a pretty tall order. We looked in earnest, but we saw nothing bigger than about 53 inches. Besides, our main focus was to find a large leopard.

One afternoon we checked on a bait that was being hit by what appeared to be a leopard family. We had built a blind there earlier, so we quietly entered to see if we could pick off the male. It was quite hot, and bugs droned annoyingly in and out of our eyes, ears, and noses. The sun was behind us. In front of us, 100 yards away, was a slowly rotting impala.

Mike first saw motion at the base of the tree and nudged me. Up leaped a little blur of motion, headed straight for the bait. I thought about it; first, it was a genet but realized quickly that it was a leopard cub. He scrambled up onto a tree branch and then hung there precariously while attempting to grab hold of the impala below. There the tiny leopard dangled, head down, trying desperately to snag a bite of impala.

Suddenly, improbably, a streaking blur of golden muscle leaped from the grass 16 feet beneath the branch – no running start, no warning, just pure vaulting muscle. The mother leopard clung to the swinging bait, just below her baby.

We watched with admiration as she helped her cub. First, she attempted to pull the impala up over the branch. Then, she actually climbed back down onto the swinging impala bait to rip off choice chunks for the cub. However, the family’s male leopard never showed himself, so we returned to camp.

Finally, the bait farthest from camp was hit. There were two sets of big leopard tracks, presumably left by a male and a female. We hopped off our truck, crept into the blind, and waited.

At 5:45, in the waning light, we spotted a leopard. It was silhouetted on the branch, over our stinking warthog bait. The leopard was big and in the clear, but Mike signaled me to remain motionless.

We couldn’t ascertain whether the leopard was a male or female. We certainly didn’t want to shoot a big female. However, the leopard wouldn’t position itself so that we could identify its sex. The clock ticked, and the sun inexorably sank as the leopard fed happily, with much crunching of bones.

At precisely 6:30, the game scout woke up, stood up, and tapped Mike on the shoulder. We had obviously run out of time for that day and date. The blind was only 55 yards from the bait, so the leopard heard the movement and took off.

The Bold and the Big

We swung by the blind early the next day. To our surprise, the inside of the blind was covered with big leopard tracks. Apparently, the leopard had been curious and bold enough to enter the blind after our departure. As a result, we decided to refresh the bait and let this location rest for the day. We would sit again the next afternoon.

We crept into the blind as the shadows lengthened the next afternoon. The golden afternoon sun was behind us as I set down my.340 Weatherby with its muzzle poking out through a small opening in the front of the blind. I bent over, shading my face, put the butt of the Weatherby close by, and observed the ants crawling over my shoes. As usual, the game scout was sound asleep. Mike sat with his binocular in his lap, and we both waited.

Out of nowhere, we heard the sound of a snapping twig. Mike quickly identified its cause through his binocular. He turned to me and pointed to a spot about 55 yards away from the blind. There, temporarily poised on a tree branch, stood our leopard, sharply silhouetted in the late-afternoon sun. Mike gave me the nod to shoot.

I slowly and deliberately raised the Weatherby and focused my sights on the leopard’s heart. The air was shattered by Suddenly, improbably, a streaking blur of golden muscle leaped from the grass 16 feet beneath the branch – no running start, no warning, just pure vaulting muscle—the watermelon-sized blast of flame from the .340. Through a cloud of kicked-up dust, I caught sight of a huge leopard cartwheeling in mid-air.

Then, silence. Mike finally asked, “Was it a good shot?”

Mike told me to stay in the blind while he went to take a look. He was leaving it when the Land Rover drove up. We both left the blind and cautiously walked about 20 feet. There, motionless on the ground, was our massive leopard. The trackers and I approached with extreme caution, but the leopard was obviously dead. We estimated him at somewhere between 180 and 200 pounds as we lifted him into the Land Rover.

We arrived back at camp, where we were greeted by the staff, all of whom were eager to celebrate. We carried the leopard over to the campfire area. Everyone was flabbergasted by how massive he was. While the songs and dancing continued into the night, we ran a few hasty measurements by firelight.

Our male leopard was about as big as a leopard gets. He taped right at eight feet over curves. Later, we went to the skinning shed to measure the skin after it was flattened out on the shed floor – it was exactly nine feet. We put the leopard’s weight at close to 200 pounds or roughly 95 kilos. We figured the skull at a shade below 17 inches. The skinned carcass had the huge neck and shoulder muscles of a lion (or a linebacker!). All in all, I was a pretty happy camper.

At the close of our two weeks, we left Botswana with a real sense of loss. Botswana is beautiful in a unique, unspoiled way. I hope that I can someday return to its blue skies, tranquil lagoons, wide grasslands, and bountiful wildlife.

Back to Member Articles